The BLAST Triathlon Club has trained so many athletes that participate in all levels of triathlon competition. The club has seen athletes go to the Olympics, World Championships and Ironman competitions! Here are a few of their stories of how they got started in the sport and what they have accomplished. 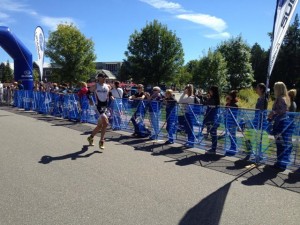 MATT became interested in running and cycling when he met his wife Kristina. It started off as a bet to complete the Around the Bay back in 2007, which he did. Matt then became interested in competing in duathlons and with the help of the Blast Triathlon Club, his first race was the Gravenhurst Olympic Duathlon. The race went very well and he finished 1st in his age group. Matt then went on to represent Canada in the World Duathlon Championships in Scotland in 2008 and had the experience of a lifetime. Matt’s next challenge was to compete in a triathlon but there was one big obstacle in his way – swimming. His swimming ability wasn’t that great; however with some personal coaching, he learned to swim very well in just a few months and competed in the Muskoka Half Ironman in 2012 in a fantastic time! Matt has since been training and has aspirations to do an Ironman in the near future. What is remarkable about Matt is that he started off with no knowledge of the sport and no athletic background in any of the 3 sports and now has transformed himself into a competitive Triathlete. 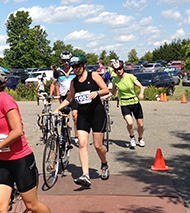 LAURA has always been interested in health and fitness but triathlons were the furthest thing from her mind. That began to change in the winter of 2011 when she joined a spin and core class run by the Blast Triathlon Club. It was there that she met Kristina and decided to ramp up her strength training in order to meet her fitness goals. Over the years Laura had been running but the repetitive nature of the sport was taking its toll on her body so she thought by diversifying her workouts, she would start to see an overall improvement in her fitness. Wow was she right! Laura now enjoys all three triathlon disciplines and has even registered in a stroke improvement class to work on her swimming. Last year she competed in her first Try-a-tri and now she plans to register for a sprint distance triathlon or… maybe an Olympic length… she will have to decide!

Not only are the workouts great, the people that you meet along the way are fantastic! Their backgrounds are diverse, but their interest in personal wellness are the common thread between us all.

DEB started running in 2005 primarily to lose some weight but the next thing she knew she was running in races and doing well in them! Her transition into triathlon started when a friend of hers asked her to do a Try-A-Tri and after a few of those she progressed to doing sprint and olympic triathlons and finally half ironmans! In 2010 she qualified for the Boston marathon which was an amazing experience for her and in 2011 she competed in the Poconos Half Ironman (70.3) where she placed second in her age group. The next natural step for Deb was signing up for the Lake Placid Ironman in 2014. Despite her knee injury, Deb is training hard for her Ironman and practices with Blast on a weekly basis.

BARB has been running for approximately 30 years. After completing several Around the Bay races and over 15 marathons, she was looking for a new challenge and did a season of duathlons.  Following this experience, she decided to learn how to swim properly and took swimming lessons at McMaster University and later sought out a swim coach. The following season she joined the Blast Triathlon Club and spent the season competing in a couple of Try-a-Tri’s and a Sprint Triathlon. To celebrate her 50th birthday, she completed her first Half Ironman Distance Race called Mussellman in 2010 in the beautiful Finger Lakes region. A sense of unfinished business was experienced by Barb and so she decided to train and compete in Ironman Canada in 2012 in which she earned the title of IRONMAN! Barb enjoys an active lifestyle and has worked on overcoming some of the fears that commonly exist in the sport. 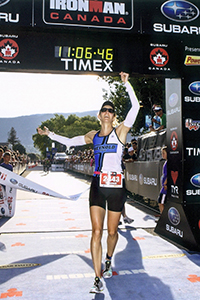 MEAGHAN stumbled through her first triathlon in 1996 on a hand-me-down bike, without any proper training whatsoever. She had done a bit of swimming, a bit of running and knew how to ride a bike, but was far from actually being prepared. Through the years that followed Meaghan was a member of different triathlon and cycling clubs; each coach and experience taught her a little something about herself or how to train, she learned so much but knew she still had a long way to go.

Finally after finishing school and dabbling in and out of triathlon for years, Meaghan settled in the Hamilton area and eventually found Blast Triathlon Club, joined a practice and immediately felt welcome. She found the members were so inviting, and the range of athletes abilities made it possible to enjoy workouts that were both challenging but not intimidating. She loved the social atmosphere (and coffee meet-ups after practice), but also enjoyed hearing stories of Ironman races and felt inspired to push herself a little more.

Meaghan put everything she had learned to the test in 2009 when she signed up for her first half Ironman. She enjoyed the challenge and process, race day was overall a success but she knew she could do better. So she signed up for a full Ironman in 2010 and trained with a true process and plan. Her training became more consistent and methodical and she noticed progress much quicker. Meaghan was able to predict her finishing time within 3 minutes (you can read more about her 2010 race here) and was once again inspired; she knew she could do even better. Meaghan immediately signed up for another Ironman in 2011 and dedicated herself to training “smarter”.

It worked! In 2011 Meaghan finished her second Ironman in 11 hrs 6 minutes, and leapt across the finish line feeling fantastic! Meaghan knows she can continue to improve and looks forward to more racing in the future. Meaghan enjoys sharing any knowledge and insight she has collected along the way with other athletes who share a passion for triathlon or endurance sports, and truly loves this tri club too! Go Blasters! 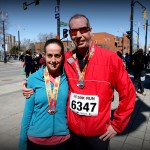 HEATHER and BRENT are new Blast members who joined in October 2013. Both have spent the past year transforming their lifestyle to be fully committed to health and fitness (and each lost a significant amount of weight in the process). It was through Momentum Fitness Club in Dundas that this couple met Coach K, who inspired them to believe anything is possible… and talked them in to joining Blast! Neither one has ever completed (or attempted!) a triathlon race before but that’s not stopping them. This couple have already started training and are following a consistent weekly schedule filled with running, spinning, swimming and strength training workouts. They also recently completed the Around The Bay Road 30K Road Race for the first time and beat their goal of under 3 hours!

Heather & Brent are very excited for the 2014 triathlon season and have already signed up for all of the club races. Their first triathlon will be Binbrook on June 7. The support and encouragement from all the Blast members has been invaluable, and they can’t wait to celebrate with their team at the finish line!